Cessationist - There is a new documentary being worked on that will examine the gifts of the Spirit and how the Spirit actually works today.  Much of what people attribute to the Spirit isn't of Him.  The makers of the film (who also did Calvinist and some other documentaries) have been fundraising for it on Kickstarter, and it did reach its goal.  Some of the people I follow online have given toward this, so I look forward to what comes from it.  Phil Johnson is on the video clip they shared, so I suspect it will be good.  Learn more HERE.

My Lonely Cry (Sermon by Don Green) - Tuesday night, Don Green gave a very encouraging message for Christians going through trouble.  He is going through the Psalms, and this one is from Psalm 142.  David was in a cave calling for help from God.  This is one that I believe people will want to share!  You can listen HERE.

Jesus is Lord (Hymn for your day):

Sadly, it won't make the murder of babies in the womb illegal nationwide.

Abortion is wrong, because mankind was created in God's image, and God's moral law makes it plain that we are not to murder.  Babies in the womb have their own DNA, and they are not the body of the mother.  Rape and incest do not give the right to take the life of another person either, as that life is given by God no matter the criminal action of one of the parents.  Each person will answer to God for the taking of a human life.  Justice will be done.  Sin was either punished on the cross when Jesus died for sinners that He redeemed and mercifully saved, or it will be paid for by the unrepentant sinner.

TEXT of Dobbs decision by SCOTUS

In Tennessee, here are links on what this means:

What This Means in Other States

Interactive Map of the U.S. and what this may mean in each state (Guttmacher)

Response of President Trump who chose Justices who rightly realized that Roe vs Wade was not Constitutional.  (Babies in the womb aren't the property of the mother due to location.)

View response: President Trump responds, and it is true that God is sovereign.

For You formed my inward parts;
You wove me in my mother’s womb.
I will give thanks to You, for I am fearfully and wonderfully made;
Wonderful are Your works,
And my soul knows it very well.
Psalm 139:13-14 LSB
Warning of Danger
Pregnancy Centers and Clinics and other pro-life people have been threatened, and SCOTUS families need protection as well. A number of Pregnancy places that support life have been damaged. There was even fire-bombing. This is terrorism, and sadly some well-known politicians are not being helpful by standing against our third branch of government's decision. Even "Attorney General" Merrick Garland is not being helpful.

Attorney General Merrick Garland called the Supreme Court's decision to strike down Roe v. Wade “a devastating blow to reproductive freedom,” and he vowed to use the Justice Department’s authority to protect the right to abortions. https://t.co/FPF3Tspnv1 pic.twitter.com/7Vv6frMdS7

(Disclaimer: I'm not a fan of the NY Times and don't recommend them.)

There are so many things going on that are stressful in life and evil in this world, but today I saw something of God's Creation that cheered me up a little.  Two deer were walking through our yard.  It took me so long to get my camera flash off that the best picture I got was of only one of them, and it wasn't nearly as good as seeing them up close.  I'm also sharing one of the blurred photos as well for you.
We see rabbits in our yard, sometimes a snake, and other creatures occasionally in the past, but it's been especially rare to see deer.  Seeing God's creation can be a blessing and a reminder that some things are continuing the same. 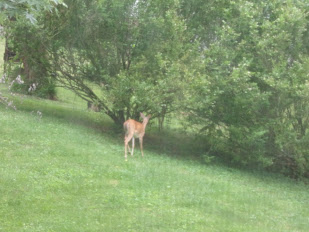 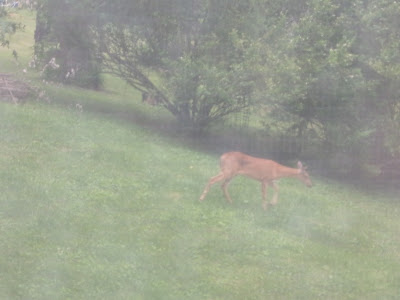 There is a teaching video I watched recently which gave some Biblical ways to address anxiety.  With all of the seeming chaos going on in the world, it is so easy to wallow in anxiety instead of focusing on God and His Word and trusting in His sovereignty. Another thing to remember is that the second death is something the Christian doesn't have to face, as Christ faced the worst on our behalf.   We don't control what goes on in this world in the way that we may think we do.  I think I too often am like the disciples in the boat thinking I'm about to drown with Jesus right there instead of like Polycarp who had courage to say that the fire would last no longer than an hour...less than the eternal fire the person having him executed would face from God.

Our family recently rewatched a movie that I got for one of them in the past.  It is about a guy who is planning to be a pastor, but he decides to lead a youth group first.  Yeah, I know, some of you may be against youth groups, but his focus was Scripture and even memorization of Scripture.  He faced a lot of challenges with seemingly only one Christian in the group.  If you are interested to watch it, it is called Play the Flute.

Play The Flute - Trailer from Play the Flute movie on Vimeo.

Cannes, France: Prayer Request
Every now and then I highlight someone I have followed on social media.
This time I'm sharing a video of a man who is teaching at a church plant in France.
Manuel has been a student of TMAI, and you can watch this video and pray for this church plant.
American Gospel: "Spirit & Fire"
This is a new documentary (in a series format) that may be released (or partially released?) this year (2022).
It is supposed to address the teaching of the New Apostolic Reformation, and I'm interested to find out who they have on it.
I'm hopeful that it will be useful to warn a lot of people about the NAR movement which has led a lot of people astray.
I had some issues with the first American Gospel documentary as some of the people used for the right side of the topic either were already off or have since gone off more from a solid gospel message (though not all, of course). I would recommend Pastors Don Green and John MacArthur.  I've heard some good messages by Paul Washer and a little bit by Voddie Baucham as well.
The first documentary had a modesty issue too which detracted from it some in my view.
God has used that first documentary though to pull people away from the false prosperity gospel or "word of faith" movements and toward the true Gospel, and for that I am thankful.
I'll admit I didn't watch the second in the series.
The next one in the American Gospel series apparently was on hold, and they reportedly were looking to watch and possibly address some response videos before finalizing their new documentary series.
Justin Peters has addressed the NAR (New Apostolic Reformation) movement and prosperity "gospel" teaching before as well, and I can recommend the Snatch Them from the Flames presentation...at least I once watched one streaming live version of that.  He also has a presentation called "Clouds Without Water."
You can read more about the upcoming American Gospel: Spirit & Fire docuseries HERE.
Posted by KT at 2:12 PM No comments:

There has been slander and defamation going on lately online of some pastors and elders where they are accused of wrongdoing without all of the facts being known.  This is not where people are warning of real doctrinal error or true heresy.  There is a place for discernment about teaching as Christians want to avoid straying from the truth of what Scripture teaches (although some wrongfully call Biblical truth "heresy").  There needs to be unity among true believers.  There are some people who want to harm the reputation of those who teach truth that they don't like, and so they try to dig up anything they can to destroy their reputations.  This week I listened to a seminar session online by George Crawford that would be worth your time to take a listen to as well.  There was an interesting point too about how in persecuted countries public disagreements can be used by persecutors as well.   We have been so used to freedom in the past that I don't think that we have wanted to consider that aspect.

A World of Lies

On a closely related topic, last Sunday, John MacArthur gave a message about the sin of lying.  He spoke about parents training the consciences of their children to fear lying.  There is so much lying in the world today.

The Disastrous Sin of Lying

How many birds do you see in the photo below? 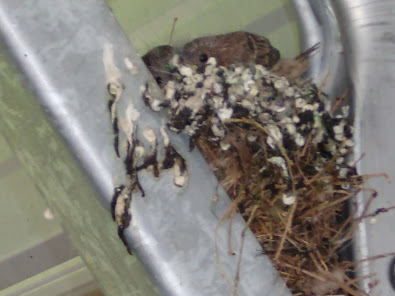 The bird with the nest had a baby or so.
Posted by KT at 4:20 PM No comments: 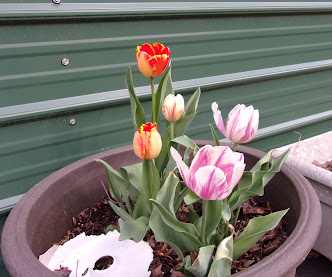 Yesterday and today some more of the tulips were blooming outside in addition to the ones that have been open for a while.

The yellow ones below were here before we lived here, and they continue to come back.  The other ones I planted last year, and this is the first year they have come up.  It was a surprise to me that I got a mix rather than all one look.  Sometimes life is like that (with surprises), but it's not always a bad thing. 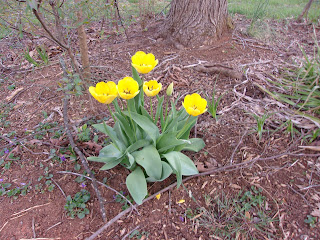 How important is truth to God?

Don Green gave a message on the commandment to not bear false witness last Sunday.  I recommend it.  You can currently get to it HERE.

Hymn For Your Day
The following hymn is one that stood out to me not too long ago, and I found this rendition with the lyrics that you can sing along with.
Posted by KT at 10:52 AM No comments:


Just to try to comply with the craziness required by some, there may be cookies, analytics, and other information placed/used by or collected by Google and any other 3rd party sites or add on features I use. 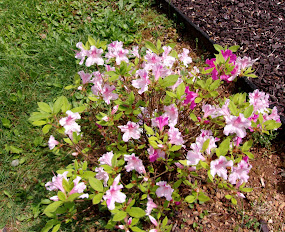 And They Are Not Finished Blooming! 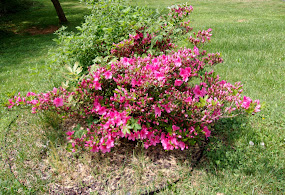 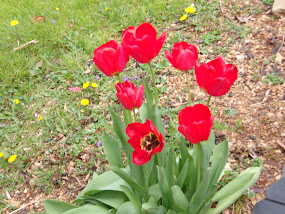 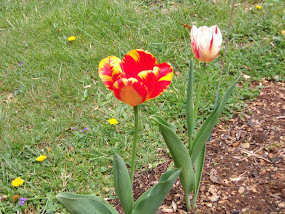 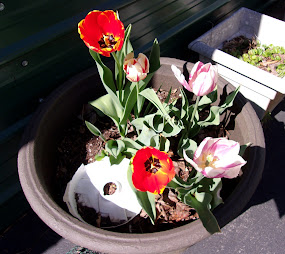 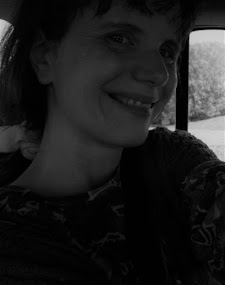