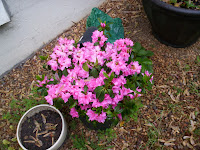 I thought I'd share some photos of some of the flowers we have that I have gotten to enjoy this month. The flowers on the right are Rocket Rhododendron. My sister bought three of those plants this year. We are trying to make a hedge near our property line. The flowers on the left are Pink Ruffles azaleas.
We plan to transplant those at some point as well. We have one more Thuja left to transplant, and some other azalea 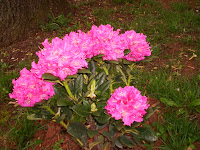 s, etc. If only I can get over this sickness I've had for a couple of weeks or so...! It may frost tomorrow morning, so I'm hoping all of our plants will make it. I plan to bring in the small butterfly bush plant. It's hailing outside now...better go rescue plants! 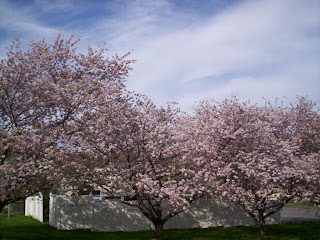 It was a beautiful day yesterday, although it felt hot and muggy. Today is supposed to be around 20 degrees cooler!
We went to the Andrew Johnson welcome center, and we saw Andrew Johnson's tailor shop. It sounded like a ghost was clipping scissors in there!
We also went to the Andrew Johnson National Cemetery which also is a veterans cemetery where veterans can still be buried in Greeneville, TN. It was interesting to try to figure out if any of the people died during a war. There were some who died the year after a war, and that is pretty sad. It makes one wonder if it was natural or suicide or injuries or an accident.
There were some who died in their early 20's, but not a lot of the ones I looked at. I certainly didn't look at all of the tombstones, as there are a lot of them....although not as many as some cemeteries. It was on a hill, and the drive up to the top is narrow! It's a hill, so a bit difficult for looking at the tombstones except for the Johnson ones and other related or officials' ones at the very top. I didn't take any photos there, but I took one of these very pretty trees!
Posted by KT at 8:15 AM No comments: