Blind Girl Sings You Raise Me Up - Korea's Got Talent

So many people have sung the song You Raise Me Up including Josh Groban (who was the first person I heard to sing it).  Well,  I thought this version I'm sharing today was notable.
A lot of times people who have disabilities have heightened abilities in some other area.  I'm not saying that everyone is talented like this, but that perhaps this blind girl's sense of hearing may be enhanced by having to use it more.
Whatever the case, she also is talented in keeping a tune and singing very well.   It's good for people to focus on what they do have rather than what they've lost.

This particular song I always sense is talking about God carrying us (which would be the case for a believer at least anyway).

Enough of my commentary, here it is!


Blind Girl Stunns Crowd With Performance of You Raise Me Up from hulahan on GodTube.
Posted by KT at 8:23 AM No comments:

Email ThisBlogThis!Share to TwitterShare to FacebookShare to Pinterest
Labels: Blind, Blind Girl, Korea, Korea's Got Talent, Music Video, You Raise Me Up 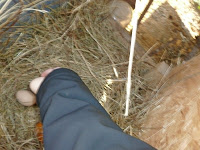 I'm having difficulty typing lately, as I have been having pain with my hands (especially one of my thumbs). Still, I thought it would be fun to share my first time helping collect eggs at a farm of some friends of the family. My sister & I collected them while we were there. I only collected 2 or 3 myself. There were no hens sitting there to move out of the way, so it was very easy. They keep fake eggs in one side to help encourage the hens to lay there or to sit and hatch them...something like that. 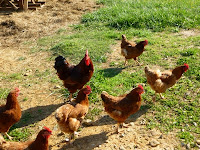 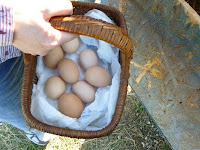 I Will Glory In My Redeemer

One of my favorite Sovereign Grace Music worship songs (and I realize I have quite a number of those) is the one I'm sharing today.

I love this rendition this song with Enfield leading (and one of the guys playing guitar was a worship leader for awhile at a previous church in California that we went to). I hope this one will be uplifting to you as well.

Email ThisBlogThis!Share to TwitterShare to FacebookShare to Pinterest
Labels: Enfield, I Will Glory In My Redeemer, Music Video, Sovereign Grace Music, Worship Song

The video I'm sharing today has a 17 year old young Norwegian woman who is a good example of someone who is willing to take some risks for the sake of the Gospel and the unborn.
Not only has she given out "180" Movie DVDs, but she also has used other tracts in sharing the Gospel.   Norway is a country with a lot of people who call themselves Christians.
I imagine like the old South in the U.S. they have a lot of people who call themselves Christians, but who truly do not know the Lord.

Norway has been in the news again recently with the reminder of Anders Behring Breivik (an example of someone who thinks they are a Christian and acts the opposite) with his court appearance. See my post from closer to the time he killed a lot of people...many of them around the age of the person in the video I'm sharing today.
http://ktundergrace.blogspot.com/2011/07/my-analysis-of-anders-behring-breivik.html

Just think about it.
This young lady has a heart to win souls and save lives, while Anders snuffed out lives of people perhaps like her. You may be surprised that she speaks great English!  Not everybody does so well learning languages as well as she has.  She's a great encourager, and I'm thankful she is on my friends list.

Once again I'm sharing some articles that stood out to me in recent times.
Just click on the underlined titles below if they interest you!

No, I didn't watch the movie from the 1990s.  I heard there was something that I find very offensive in it...probably more things.  I didn't even watch the 1950s version.  I guess people dying on a sinking ship doesn't seem too entertaining to me.

I know there has been some controversy about this documentary, but I'm interested to see what these resources are... and one day see the the documentary on DVD perhaps.

The Resolved conference in Palm Springs is already taking Registrations.  You can get a good deal if you register before April 30, 2012.  The speakers that are on the list to be there are: John MacArthur, Al Mohler, Steve Lawson, C.J. Mahaney, Rick Holland, Jonathan Rourke and Austin Duncan

This is a worthwhile article about Rick Warren and the idea of preaching to "felt needs."


(This version is on Baptist Press)  This is a great article about the difficulties that Christians will face standing up for Biblical marriage and the challenges pastors will face.
Posted by KT at 8:00 AM No comments:

Our pastor has a favorite hymn that we have sung at church that I have enjoyed.  Okay, so I'm not a strictly hymns sort of person for church.  I enjoy worship songs, and those who have followed my blog know I like some Sovereign Grace Music songs quite a bit.  I do like some hymns...and some of those older ones as well.  I don't like hymns for the sake of them being hymns though.  There  are many that do not have sound Biblical lyrics as well, and I'm sure many people will admit that some have boring tunes.

The following one might get old after awhile, but so far I've enjoyed the tune and the lyrics!
This video does have some imperfections, but I enjoyed some of the scenery of God's Creation to go along with the song.  Besides, I know some family can't see videos from YouTube still with their proxy service!  This song is by Keith Getty and Stuart Townend.

I admit that I have been very disappointed that Rick Santorum dropped out of the race for U.S. President.   The reason it is so sad is that I had hoped and prayed for mercy for this country.  Romney has said the right things, but his actions as governor of Massachusetts said otherwise.  I wanted a truly pro-life & true Biblical marriage candidate who would not be like Arnold Schwarzenegger in California.

Some verses came to mind during this time that I wanted to share with people.  If you have also been disappointed, perhaps you will identify with my thought processes.

Hope deferred makes the heart sick, But desire fulfilled is a tree of life.  Proverbs 13:12 NASB

When the righteous increase, the people rejoice, But when a wicked man rules, people groan.    Proverbs 29:2 NASB

Okay, so I have to face the sorrowful fact that we may be facing more times of trial in this country.  With that, we may be facing a higher degree of persecution for standing up for Biblical principles than ever before.  Already that is beginning to happen in America, and I realize that it is happening around the world.  In some places it has been happening to a much greater degree for a long time.   God has had mercy and allowed for Christians to have much freedom here for many years.

Tonight something came to mind that happened in the life of David.  Perhaps there is no direct relationship here, but I think I can take some solace from it.  For many of us the grieving is a little like someone who has lost someone or something valuable that they greatly cherished.  Our nation has sinned against God, so while we long and pray for mercy we know that we are not deserving of it.

Then his servants said to him, “What is this thing that you have done? While the child was alive, you fasted and wept; but when the child died, you arose and ate food.”
He said, “While the child was still alive, I fasted and wept; for I said, ‘Who knows, the LORD may be gracious to me, that the child may live.’
“But now he has died; why should I fast? Can I bring him back again? I will go to him, but he will not return to me.”   2 Samuel 12:21-23

So, although I still sorrow, I know that this is all within God's plan and will.  Perhaps His will is not the same kind of mercy that we desired, but we still know that He is good to those of us who put our trust in Him.  God will bring His good and purpose, and now we must keep fighting the fight of faith.   The war is not a physical one but a spiritual one.   Thankfully, I know that God will win ultimately, but I know that things are going to get worse here on earth.  I have been blessed to have been around for times when there were positive things that have happened on earth, although bad things are always present as well.  God is still my Father, and I know that He will take care of me no matter who is in power.

The following was written at a time when people were suffering and dying for their faith in Jesus:

Be gracious to me, O God, according to Your lovingkindness;
According to the greatness of Your compassion blot out my transgressions.
Wash me thoroughly from my iniquity
And cleanse me from my sin.
For I know my transgressions,
And my sin is ever before me.
Against You, You only, I have sinned
And done what is evil in Your sight,
So that You are justified when You speak
And blameless when You judge.
Psalm 51:1-4 NASB

But God demonstrates His own love toward us, in that while we were yet sinners, Christ died for us. Much more then, having now been justified by His blood, we shall be saved from the wrath of God through Him.
Romans 5:8,9 NASB

The angel said to the women, “Do not be afraid; for I know that you are looking for Jesus who has been crucified. “He is not here, for He has risen, just as He said. Come, see the place where He was lying. “Go quickly and tell His disciples that He has risen from the dead; and behold, He is going ahead of you into Galilee, there you will see Him; behold, I have told you.”
Matthew 28:5-7 NASB
Posted by KT at 8:00 AM No comments:

Someone on another site shared this song entitled "Jesus, Draw Me Ever Nearer" from the In Christ Alone album.
Some people had sung it to this person's daughter who was going through life threatening trials. She has suffered most ... if not all ... of her life.  This version is sung by Margaret Becker.  I used to listen to her years ago, but I don't know much of what is going on in her life these days.

The song is encouraging to think about the good that God is working through my trials.  Whether it's relational with a church or people or the physical pains and trials of myself and my family members, this song of prayer is a prayer of hope to my Heavenly Father who loves me.    People will fail us and our bodies will fail, but I can thank God that He will never fail me.  Somehow he is working these things for my good and His glory.  Trials not only help to make us trust Christ more than ourselves and the world and even other Christian believers, but they also make us more like Christ and see our hope and joy is in Him.