This week Senator Ted Cruz stood up on the floor of the U.S. Senate and kept control for 21 hours to focus on defunding Obamacare.

The mainstream media would have people believe that it was just a "rant," and they seemed to want to focus more on the Dr. Seuss bedtime story for his kids than the main substance of his speech. (Notice they ignored the paraphrase Proverbs he read to the kids as well.)  The media didn't seem to pay much attention to all of the tweets that Senator Cruz read by real people who shared why they didn't want Obamacare.

Since the mainstream media and career politicians want to sneer and shut down the discussion like the political machine in Mr. Smith goes to Washington, I thought I would try to highlight some of what I learned both from Senator Cruz and share some of my own observations and comments.

Real people are losing their jobs or having their hours cut.   Yes, a lot of businesses and places are cutting back to avoid paying health insurance costs for their workers due to Obamacare.  This affects young people losing out on wages as well as others who will have to fend for themselves trying to pay for healthcare with reduced incomes.  This is likely to put more people on welfare and onto government healthcare rolls.  Do we want more homeless people and a more bankrupt government?  Forcing people to pay for what they can't afford or don't want is more likely to hurt them than help.  You notice that Congress is not being forced to accept this for themselves.

People are actually losing hospital access and doctors.  A rural Virginia hospital is closing it's doors.  Yes, it is already a victim of Obamacare.  In TN, some people on certain government subsidized plans have lost access to some of the area hospitals.  Obamacare has made the reimbursements too low.  Do not imagine that the insurance plans under Obamacare are going to be great plans with lots of access to great doctors.  As a person on Medicaid, I know the limitations of doctor choices, and I even got a letter that some people under my insurance will have to start paying a sum towards previously covered prescriptions next month. I'm not even certain that next year when I was hoping to see a specialist at Vanderbilt that I will still be eligible to be covered for that out of network doctor.  It's up in the air, but I know God is sovereign.

President Obama said that people who liked their doctor or plan would be able to keep them.  This was fiction.  People at Walgreens are being taken off of the coverage they had and having to go to the "exchange" plans which likely will not be as good as what they had.  A major shipping business is taking spouses off the rolls of being covered.  As I previously mentioned, people are losing hours so that their employers will not have to cover their insurance costs.  Some hospital jobs are being lost.

Insurance companies may get around the Hyde amendment which bans federal money from going for abortions by having a "surcharge" to cover them in some states that haven't banned them.  If you can afford private insurance that doesn't have abortion coverage, it would be better.

While I do care about people with preconditions, it is not necessary to mandate everybody pay for something they don't want in order to help those truly in need.
The U.S. Senate and the mainstream media may mock and ridicule Ted Cruz for fighting for a "lost cause," but to stand up against a disastrous mistake and worse was truly a courageous and worthwhile thing to do.  Whether you are Republican or Democrat, this bill is not what you want.  Even the unions don't like it.

My hope is in God, and I know that He is my strength.  I cannot trust in government or health coverage.  Freedoms are eroding in this country, and this is just one tip of the iceberg.  Some things are worth fighting for, but my main desire is that God will use me for His purpose and to further His Kingdom by sharing the truth with you.  Please read the message on the following link:
ARE YOU READY?

Pray for the Persecuted Church Around The Globe 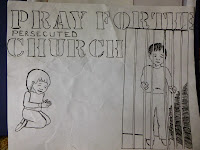 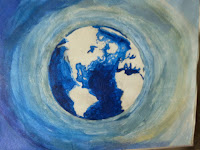 Remember the prisoners, as though in prison with them, and those who are ill-treated, since you yourselves also are in the body.
Hebrews 13:3 NASB

In China, people from house churches risk being put into jail, and in Central Asia and other Muslim countries Christians and those who convert from Islam to faith in Christ are often at risk of losing their lives.

Recently I shared about a street evangelist named Tony Miano who was arrested in England, and these arrests are spreading. A pastor named Josh Williamson was arrested in Scotland not long after another street preacher was arrested in the U.K.
If you are a Christian, you won't want to miss the interview that Tony Miano did with Josh that I am sharing the link to on this post.

Don't think that America is immune to this. Freedoms get eroded a little at a time and when nobody says anything it can go downhill faster. While Christians are warned in the Bible of persecution, people in western countries may think that will never happen here. Well, the U.K. has been seen as a country of freedom, and now we see the example of when authorities there step out of line and exceed their authority when people don't want to hear the Gospel.
People are hardened in their rebellion against God and the Gospel as evidenced by the reaction that you will hear about on this hour long program. It's worth your time to listen, so I hope you will make time to hear it!
http://www.blogtalkradio.com/cross-encounters/2013/09/23/cer-monday--christian-profiling-in-the-uk/scrub/97
Posted by KT at 8:08 PM No comments: 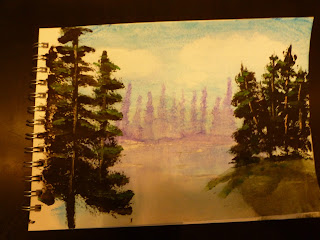 This is an unfinished painting that I have been working on.  It enters my mind in sharing this that I am an unfinished painting in a way.  Oh, I don't mean literally of course, but God is working on my life and is completely sovereign over it.  He doesn't make mistakes or substitutes like I do.  While I may sin in my life and things may seem out of control with my body doing really strange things that frighten me, even what I do or what the result of this fallen corrupted decaying world entails cannot alter His ultimate design and plan for both me and the world.  One day I will finally see the completed picture.
What looks like chaos in this world will end with a joy for all believers that all our suffering cannot be compared with.

For I consider that the sufferings of this present time are not worthy to be compared with the glory that is to be revealed to us.
Romans 8:18 NASB
Posted by KT at 9:16 PM No comments:

Twelve years ago America was attacked on September 11, 2001.
Many of us will not forget how we heard about it and how we felt.
I turned on the radio while still in bed and made guesses about who had done these things after realizing that it was a real event.
People flooded into church and were ready to acknowledge God for awhile.  Patriotism was high.

I was thinking this afternoon about some of the facts that stand out when events like this take place in the world.

"Should She Preach?  Biblical Evangelism for Women" (New Book) -- What does the Bible say about women and how they evangelize?  Tony Miano's book "Should She Preach?  Biblical Evangelism for Women" deals with the world of street evangelism and what level women should participate from a Biblical perspective.  I have not yet read it, but I have won a copy and am looking forward to seeing what it says.  There are contributions by Steve Lawson, Phil Johnson and others.  It's available for pre-ordering, so if you want to see more about it click on the book cover at the following site: http://tmiano.com/should-she-preach/

Feminism and Exegetical Mayhem -  Interestingly there was a blog post by John MacArthur recently about women's role in the church.
http://www.gty.org/Blog/B130826

You Can Take Heart in Uncertainty - Jon Bloom recently shared a post that is a reminder to me to take heart during the time of uncertainty I am having with my physical condition.  It is hard when you have something that makes you feel awful and is frightening at times.  God does have a purpose for my good even though in my humanness I struggle with endurance.
http://www.desiringgod.org/blog/posts/you-can-take-heart-in-uncertainty

"The Glorious Unfolding"  -Steven Curtis Chapman has a new album coming out September 30, 2013.    It should be interesting to hear what he has done with this new album, and it reminds me of years past when I listened to his music more.  Here is a sample of one song he did about temptation way back when: