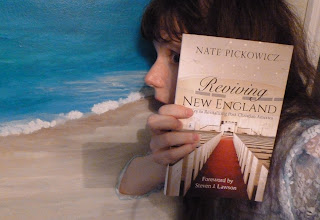 A Pastor friend of mine by the name of Nate Pickowicz (who previously wrote THIS Article for me)  has recently had a book published, and naturally I was interested to see what he had to say.
He was kind enough to include me to receive a copy of the new book.
Although it was never said to be required of me, I had it in my mind to do a book review.
I saw some glowing praise for the book before it arrived, so my excitement mounted.

The following were some of the early comments I saw:

So, I've now begun to read the book for myself.
I'm not nearly as fast of a reader as my online friends, but I've read two chapters so far along with Steve Lawson's excellent forward and the introduction.

Here are my first thoughts and summaries of what I've read:

Much of the first chapter is a historical account which talks about revival, the need for revival, the Great Awakenings, and the spiritual slide that has happened in the northeastern area of America,
Clearly, Pastor Nate Pickowicz has a heart and passion for his native New England.

He not only traces the history of Christianity in New England and its influence on the nation and the world, he makes it clear that he longs to see this happen again.
He is laying out a strategy in this book based on the Bible and history.
Certainly, the book's emphasis is especially on the preaching from the pulpit..which is great!

The major spiritual decline is lamented, and the percentage of actual Christian believers left is extremely low.
This is sad but not surprising to me, as I see the northeastern U.S. as very liberal - which manifests itself politically, as well as morally (though they are not alone), and spiritually.
I digress.

Anyway, near the end of the chapter, it begins to be more encouraging with more optimistic hope instilled.
I found myself leaping in my mind beyond even the necessity for Biblical preaching from the pulpits, but it also reminded me of the need for evangelism there in New England (as I'm aware that some are involved in that by things like street preaching and tract distribution - and one on one conversations - on college campuses and at abortion clinics).


On to Chapter 2.
After tracing the history of revivals from the Bible onward, Pastor Nate begins to describe what preaching should and shouldn't be like.
As I read the descriptions of what preaching should not be like, I knew that I had heard some of these methods.
I wish that many pastors would read and pay attention to what he's saying on this.
If you want to know fully what I'm talking about, you'll just have to read it for yourself.

I've definitely heard the "Springboard" preaching method where a pastor takes a text, and then they spend half or more of their sermon completely off topic or putting their own theme into the text (which might be mixing in the hobby horse method or just plain inserting some other topic into the mix).
This 2nd chapter in Reviving New England reminds me of how I felt when reading the book Pulpit Crimes by James White, and my mind assents a big Amen to what Nate is saying.

Again,  as to his describing what preaching should be like....Amen!
And again, you'll have to read the book to know what he says it should be like!

Pastor Nate includes a lot of quotes from other sources, so this is a helpful compilation all in one place (although I can't vouch for every source...though some I do know are good).
I've enjoyed a bit of the review of history and how it all is fitting together.

I would love to have a pastor like Nate Pickowicz down here where I live, so that our family wouldn't have to "settle" for some compromise in doctrine & practice - or to be stuck at home with live-streaming trying to figure out what to do next (though my physical issues can make me feel not up to going places at times anyway).
Christians, please pray for a church plant to be started where I live where we could actually even become members.
We love the plus of excellent live-streaming (and I would hope to continue), but we want a church home.
I'm thankful for some fellowship at times where we've been, and that not all of the teaching has been unbiblical.

Also, please pray for New England, and for the Word of God to be preached faithfully and accurately by men who love and live out the truth of Scripture!

You can find Reviving New England on Amazon directly or by going through the Entreating Favor webpage HERE.